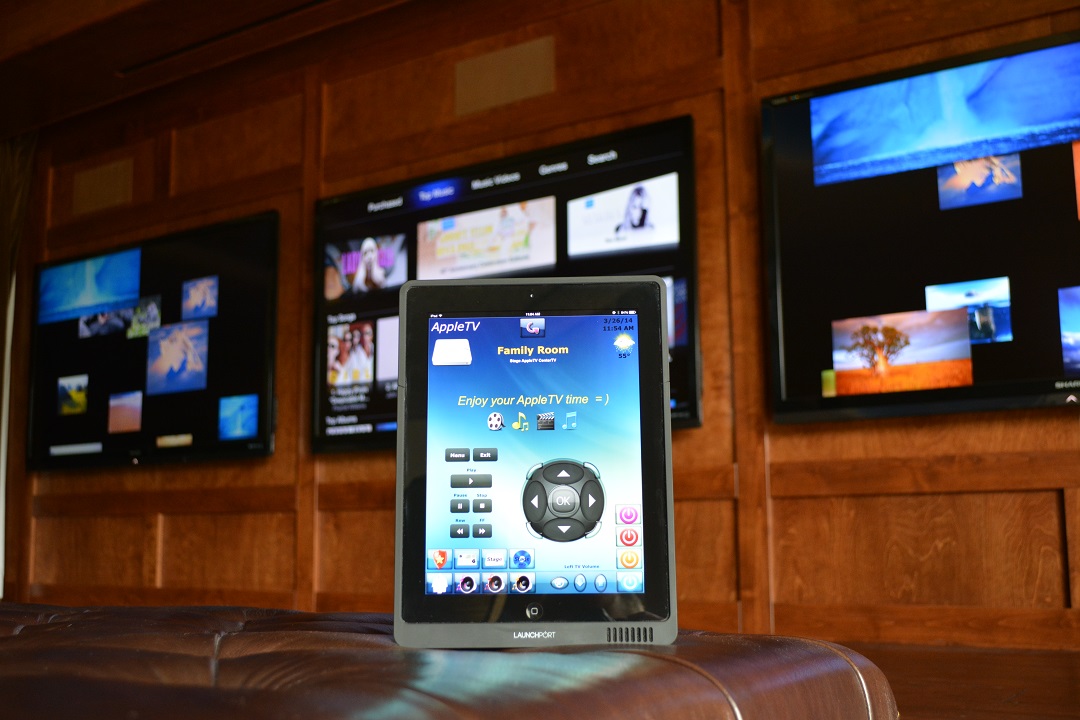 If you happen to be a hiking or trail biking enthusiast or simply a lover of nature and wildlife, you may have heard of the Santa Rosa Plateau, an extension of the Santa Ana Mountains in Riverside County.  Just down the hill from the Plateau is the city of Murrieta, and nestled along the base and climbing up the mountain side is the upscale gated community of Bear Creek and the site of this Project of the Day.  We were called in for a walk-thru of the home formerly owned by the MLB’s very own Barry Bonds.  This 12,000+ sq. ft. house was completely gutted, every wall resurfaced, entire ground level flooring ripped up and replaced, and creative ideas and system designs drawn up to create quite the spectacular Audio/Video/Smart Home Extravaganza. Obviously with a home of this size and the level of construction/remodeling, our job there was not completed in a day, or two, or fourteen, or sixty, or even three hundred.  All in all, it took about a year and a half total to get this home finished entirely.  There is a joke between the owner and all of us at ATD that all his Audio/Video/Home Theater/Smart Home System only took 27 phases to complete.  LOL!  Let it suffice to say that by the time we finished we were looked at like part of the family, Holiday cards each year and all!  I want to now take you into the smart home installation of just one room.

In this Phase we were to design, install, and finish what was being called the Grand Family Rm.  This task involved working with a carpenter who was building a custom stage for music and plays to be performed on so that we could correctly incorporate the three 70” TVs, a motorized 144” projection screen, three in-wall front speakers, three Blu-Ray players, three AppleTVs, and color changing LEDs to give the stage a super cool look.  Besides all the work on the stage we were to install a motorized projector lift in the attic above the Grand Room so that a projector would drop down from the 12’ ceiling, install two large in-ceiling subwoofers, incorporate four existing in-ceiling speakers into the 7.2 Surround Sound System, program the decorative blackout curtains that were installed at each window and the back patio French doors to open and close with the touch of a button on this room’s iPad which I was to program up using an RTI processor and RTI iPad App.  This room was definitely fitting to its name….it is truly a GRAND Family Room.  Here is the gear we used for this portion of the whole-house audio video installation:

As you can imagine with a project of this caliber, some things take longer than others to accomplish.  That being said, mounting the scissor lift in the attic/ceiling was the most involved task for sure.  It took a team of 4 of us to accomplish this in a safe and professional manner.  I was scrunched up in the tight attic space in the semi-vaulted ceiling, squatting over the square cutout for the lift staring at the tile floor 12’ below, we had 2 men on 10’ ladders, and finally one man who helped hoist and hold the lift in place using a rope and pulley system we rigged together.  There is no such thing as over-kill when it comes to the safety of our employees and the security of our customers and their families.

The finished product was truly amazing.  Our customer had the ability to watch 3 individual sporting events on the 3 TVs, or watch the same program or movie on all 3 TVs at the same time or drop the projector down and enjoy a movie on the 144” projection screen.  When it came time for his grandchildren to perform a play on the stage, he could close all the curtains in the room, turn up the stage overhead lights, and turn on the stage color LED effect lights with a few button presses on the iPad I programmed.  When he is finished using the Grand Family Room he simply pushed the Power Down button on the iPad and all 3 TVs turn off, the screen rolls up into the overhead stage cabinet, the projector scissor lift raises up and into the attic and the surround sound system turns off.  This was definitely one of our most exciting projects to date and the customer loved it.  Phase 1 completed…26 more to go.